Did you know the Spotmatic series cameras could be modified by Honeywell for having mirror lock-up? 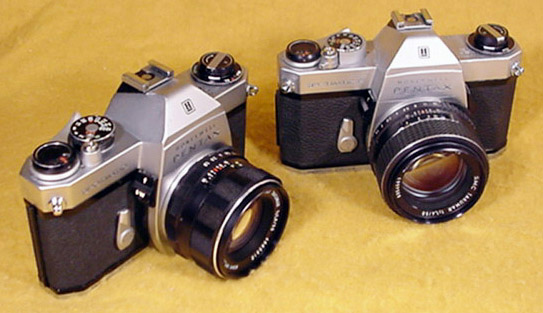 How many variations of the Spotmatic do you have in your collection? This versatile, durable, well-designed SLRSLR
Acronym of "Single Lens Reflex". See also "Reflex" was developed and improved with a series of detail changes that resulted in a family of cameras. If you wanted to have one example of each major variation, first you would have to cover the series of Spotmatic models. You would need both the Asahi Pentax and Honeywell Pentax versions of the early Spotmatic, the later Spotmatic (Product 23102), the SPII, the SP500 and SP1000, and the Spotmatic F. And you would need both a black and a chrome version of both the Asahi Pentax and the Honeywell Pentax versions of many of these models. Then you would need the Honeywell Pentax SPIIa, produced in both chrome and black finish, only for sale in the United States. Do you consider the SL to be part of the Spotmatic family? Then you need four more cameras, both the black and the chrome versions of the Asahi and Honeywell SL cameras? How about the motor drive models? Both the Set 36 and Set 250 variations? And do you have a Spotmatic Data? Don’t forget the Spotmatic Data Motor Drive camera! And there are special instrument models of some of the cameras in the Spotmatic series, intended for industrial and scientific applications. Well, that’s at least several dozen cameras, and we haven’t even gotten into the Electro Spotmatic, ES, and ESII yet.

So you thought you had them all covered? Now what if I tell you that there were special versions produced of almost all the mechanical shutter Spotmatic cameras that changed the appearance of the camera, adding a switch on the right side of the camera lens just opposite the meter switch on the left side of the lens. Let me also tell you that this special option, the mirror lockup switch, could be ordered on almost any model of Spotmatic for an additional charge? Do you see the results of this? Now you need to go out and find several dozen more cameras for your collection! 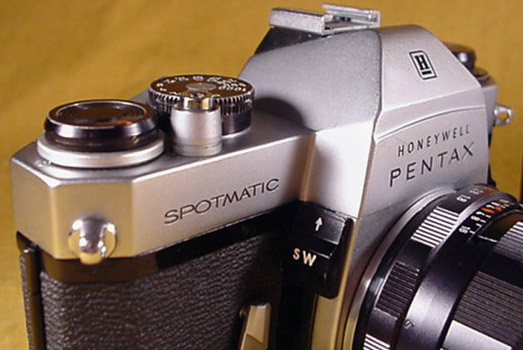 I am not making a joke here! The mirror lockup switch was a cataloged option throughout almost the entire production period of the Spotmatic camera series. The mirror lockup switch looks identical to the meter switch, but is located on the opposite side of the lens mount. Pushing the switch upward raises the mirror to a lockup position which is then released by pushing the switch downward. The option was intended primarily for use with long telephoto lenses, to eliminate camera shake that could result from the mirror movement. It was useful for nature photography as well as taking pictures of night sky and stars through long lenses or telescopes. The mirror lockup was listed as an option in the Honeywell Photographic Catalog, and was priced at $40 on most of the Spotmatic models during the late 1960s and early 1970s.

Since ordering this switch was entirely the choice of the camera buyer, the distribution of this option among Spotmatic camera models appears to be entirely random. However it is most commonly encountered on the more expensive cameras of the series, such as the Spotmatic Motor Drive cameras and the various specialized instrument bodies based on the Spotmatic series.

So what is your preference in unusual Spotmatics? Would you like a special instrument Spotmatic with the mirror lockup, or perhaps a Spotmatic II Motor Drive Data II camera with the option? They probably do exist! Take a look at the accompanying photos and then watch carefully when you go to the camera shows for the Spotmatics with two switches! You need many more cameras to make your collection complete!

The original article was published on SPOTMATIC magazine #29, July 2001.