Asahi Optical Company began producing motor drive versions of their popular Spotmatic cameras shortly after the introduction of the series, and similar optional motor drive systems were available through the production of the KX and the KM cameras in the mid 1970s. All of the Spotmatic, ESII, KX and KM motor drive cameras are special models with the necessary provisions in the camera for coupling with the drive. These cameras are identified by the words MOTOR DRIVE engraved in the front or the back of the bottom cover of the camera. Unlike the later Pentax MX, where all standard production cameras had provision to couple to a motor drive or winder, the "standard" production Spotmatics, ES series, KX and KM cameras are not equipped to work with the motor drive system. 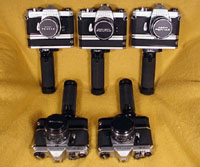 There are actually several distinct variations of the early motor drive system which were intended for application to particular camera models, and improper combinations of components can lead to frustrating camera malfunction problems. I believe that the easiest way to understand the proper combination of components is to disregard the camera model and instead concentrate on the contact arrangement between the camera and the motor drive. The reason I am recommending that you look at the contact pattern is that the motor drive compatibility information in some factory references and price books are somewhat contradictory and misleading.

If the bottom cover of the camera has three electrical pin contact panels, which form a complete circle with equal width thin areas of insulation between the panels, the camera requires the Motor Drive I (identified by the number 70001 on the bottom cover of the motor). The Motor Drive I.uses the Battery Grip I which has two contacts between the grip and the motor. Early production of the Motor Drive I were fitted with an extended knob on the film frame counter, while later production examples of this unit were fitted with a flush counter setting ring which is more difficult to operate. The Honeywell Pentax stock number for Motor Drive I is 7012, and for Battery Grip I is 7013.

If the bottom cover on the camera has three electrical pin contact panels which are NOT equally spaced (a larger area of insulation is between two of the panels), or if it has for four electrical pin contact panels, the camera requires the Motor Drive II (identified by the number 70054 on the bottom cover of the motor). The Motor Drive II uses Battery Grip II which has three contacts between the grip and the motor. The Honeywell Pentax stock number for Motor Drive II is 7389, and for Battery Grip II is 7390.

The mismatching of any of these components in arrangements other than that which is described above may result in failure of the camera to function. The most serious potential mismatch occurs when a 70054 Motor Drive II is put on a Spotmatic or Spotmatic II Motor Drive body. The extra pin on Motor Drive II falls across the gap between two contact panels on the camera and could cause a direct short circuit. The 70001 Motor Drive I will generally function on a later model camera if it can get good electrical contact.

The Battery Grip I will usually work on a Motor Drive II, but the Battery Grip II may cause a short circuit if applied to a Motor Drive I because the third contact pin falls across the gap between two contact plates. Please note that I have not been able to try every possible mismatched combination of motor and camera so I can not say for sure what the results of a particular mismatch might be in every case.

The lack of understanding of the need to have the correct electrical contact patterns between components frequently results in Spotmatic Motor Drive cameras being diagnosed as "broken" when they really do not have any problem. The writer has purchased a number of cameras that were described as "broken", from sellers who did not understand the system, often at greatly reduced prices. I subsequently found all of them functioned correctly when matched up with the correct drive and battery handle.

1. Spotmatic Motor Drives tend to be reluctant to function when they have not been used for a while, or when the contacts between battery handle, motor, and camera are dirty. Clean the contact panels with a soft eraser, and run the motor drive occasionally to keep it lubricated and functional.

2. The Spotmatic Motor Drive cameras are fitted with a special back cover that has a spring loaded upper hinge pin. This allows the back to be removed so that the user can install the bulk film back. If the back cover on a Spotmatic Motor Drive camera is damaged, it can be replaced with a conventional Spotmatic back cover by removing the four screws just under the edge of the leatherette front panel. A conventional back cover will install and fit properly, but the removable feature will of course be eliminated.

3. The original ten cell Nicad batteries are generally unavailable at this time, however you can use two Hasselblad five cell Nicads (Varta 5/V500RH) which will fit the battery handle properly and provide the same voltage as the original battery. This pair of batteries is, however, extremely expensive in the USA, with the cost often close to $200. Note that the same Nicad battery charger is used for both the Battery Grip I and the Battery Grip II. It has two contact pins, but it connects correctly with the three pin battery handle. The Honeywell Pentax stock number for this charger is 7014. The bulb in the charger is an active component in the charging circuit, possibly intended to provide a load in case the battery is completely dead. If it is blown out the charger will not charge at all. It is a common 12 Volt electronic bulb, and is available worldwide and from Radio Shack stores in the United States. A small plug-in battery checker was available for monitoring the condition of the Nicad battery. It is Honeywell Pentax stock number 7019, and works on both types of battery grip.

4. A battery adapter was offered for these drives which mounts eight 1.5 Volt AA alkaline batteries. This adapter presently is the most economical solution to powering a Spotmatic Motor Drive camera. Please note that Nicad AA batteries sold at electronics stores are only 1.2 Volts each and may cause slow cycling and overloading of the motor. It would require ten Nicad batteries to equal the voltage of eight of the alkaline batteries, and the battery adapter does not have provision for this many AA batteries. The same AA battery adapter was used for both the Battery Grip I. and the Battery Grip II. It is Honeywell Pentax stock number 7018.

In addition to the accessories that we have listed above, there was also a plug in power supply, a relay box, a second timer, an hour timer, and a minute timer produced for use with these motor drive cameras. There was also a radio control remote unit produced.

One additional note regarding Pentax motor drives. The only motor drive version of the K2 camera is the K2DMD, which uses the Motor Drive MD, a totally different unit from the equipment described in this article. This is a source of considerable confusion in publications and also in eBay auction descriptions. The Motor Drive MD is ONLY usable with the K2DMD and will not operate on any other model of Pentax camera. The Motor Drive MD does, however, share battery packs and power sources with the motor drives for the MX and the LX cameras. Power sources that are suitable for use with the Motor Drive MD include the Nicad Battery Pack M, the Nicad Battery Pack LX, the Battery Grip M (intended for alkaline AA batteries, not AA Nicad batteries), and the Power Pack Unit M.

The original article was published on SPOTMATIC magazine #26, October 2000.