In year 2000 the Pentax LX celebrates 20 years since its introduction in 1980. Here we discuss a prototype and some special variations of this famous professional camera.

There are some special editions of the LX which are quite well known in spite of being rare, but a prototype LX is almost impossible to see anywhere. On occasion of the 20th anniversary of the LX we will discuss such rare variations.

Anybody can guess that many prototypes of the LX should have been manufactured during the development of that famous professional camera from Asahi, but I never saw one, until last April. Rudolf Hillebrand, editor and publisher of Photo Deal (that very nice collectors magazine from Germany) mailed me a few pages from the Japanese magazine Asahi Camera. I almost jumped up: among all those Japanese words there were two pictures of a prototype LX, called the AP. No doubt about that, as the shape of the camera was very recognizable, even though the pentaprism was different from the mass-produced type and it sported different lettering on front!

Of course, I immediately asked Asahi about any possible information and pictures about that prototype and other LX prototypes. Unfortunately, they just sent me those two pictures again and wrote that it was the final stage of the development of the LX, just before the final version. Some translation from Asahi Camera’s article by my friend Osamu Togo added some more information, so I’ll try to sum up everything and look at pictures to see any difference between the AP and the LX.

The development of the LX started in 1975, just after the introduction of the K-bayonet mount, and two different cameras were designed to choose from. One was a fully mechanical camera, whose designation is unknown, while the AP was an AE camera. At the end of the developing period, the AP was chosen, being more compliant with the trend of the era among professional cameras.

By inspecting the pictures of the AP, we see that the body is identical to the mass-produced LX, with only the top of the mirror box maybe slightly wider to accept the stocky pentaprism. Both the shutter speed and the compensation dials look different from standard LX types you all know, with white, orange and green lettering, but they are the custom types, also available in Japan for the LX.

As opposed to the almost standard body, the pentaprism housing looks somewhat different, or maybe it's just the effect of the different pentaprism. The front of the pentaprism is flat and shows white ASAHI PENTAX lettering, with a classic black lacquered AOCo logo above it (due to high contrast, it is only visible by enhancing a lot the picture brightness), thus proofing it was developed some time before (*). The hot shoe lacks the X engraving. No idea about the pink round seal on top of pentaprism, while the 11A109 on its side could be either a serial number or a part number, or even an inventory number.

The task of the LX designers was to create a professional camera both sturdy and compact. To reduce weight, they adopted an aluminum alloy shell instead of brass. Finder screen interchangeability from lens throat was adopted to obtain ultimate compact size. A hybrid shutter mechanism was adopted to allow working without batteries, but was then abandoned to realize compact size. Good operation feeling and handling were improved many times. An exceptionally quick – as well as noisy - mirror mechanism was designed in order to achieve the shortest possible time lag for the shutter release. The IDM (Integrated Direct Metering) was a further development over the Olympus OM-2 concept. Some customization was made available (see Spotmatic No.19, page 16), in order to meet various users’ needs.

The LX is made of 1,350 parts of 940 different types. A special "handmade" assembling technique is necessary and six persons are necessary to build a LX. A contract with suppliers of electronics prevented discontinuation of obsolete IC’s, so that the LX could be produced for more than twenty years.

Three sectioned versions of the LX are known, made at the time of launch for demo purposes. The most familiar one is cut from front to center and then from center to the right side of the camera (see picture). No serial numbers on these demo cameras, as it should be in the missing part of the bottom plate.

My estimate about the number of cutaway LX of this type is well below 100, maybe a few tens. I believe each national importer was given one, with possibly some extra for USA. I am aware of only one cutaway LX in Italy, now owned by an AOHC member and displayed at 5th Pentax Day in Cervia last May. 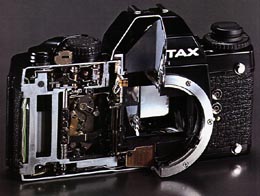 Another variation has two "windows" in body shell on both sides of the mirror box. The top housings are also sewn to better show the inner mechanisms (see picture). No information is available about serial numbers. 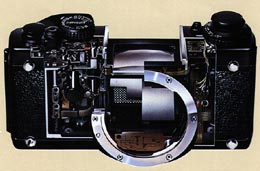 A third variation of the sectioned LX does also exist, sawn by a single cut from front to back. Pictures of this variation have been published in Japanese magazines. 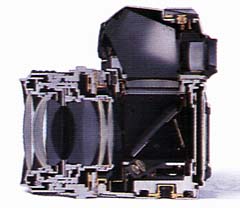 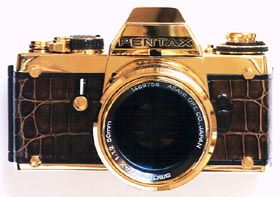 It was March 16th, 1981, one year after the introduction of the Pentax LX. The ten-millionth Pentax SLRSLR
Acronym of "Single Lens Reflex". See also "Reflex" camera, an LX, came out of AOC’s main plant in Mashiko and was given to the chief designer, then chairman of Asahi Opt. Co. Ltd. Minoru Suzuki. In order to celebrate this 10 million event, on August 25th, 1981 a limited edition "LX Gold" was introduced. It was 18 carat gold plated with brown leather (also-called lizard skin or snake skin) and was equipped with an SMC Pentax f/1.2 50mm lens also with brown leather and gold finish. All dark details of the LX Gold are dark-brown instead of black, including the front lens ring and film chamber, with only the film pressure plate and the small watch curtain in black. Of course, the natural titanium shutter curtains remain unchanged. Also a brown lens cap and everready case were provided with the LX Gold. The package included a wooden box with red lining and white silk gloves to handle the camera without leaving fingerprints on the sensitive gold plating. Both the camera and the case are provided with golden carton boxes sporting 10million logo and 1981 lettering.

Only 300 pieces of the LX Gold were manufactured, 200pcs for the Japanese home market and 100pcs for the international market. Serial numbers for the LX Gold ranged from XM001 to XM300 (XM meaning ten million). Sales started in November 1981 at 850,000 Yen, but not all of them, were sold, as some were either given to Pentax importers worldwide or became prizes for photo contests. In 1983, Mr. Greg Peck won an LX Gold as first prize in a photo contest held by British magazine Camera Weekly. Mr. Peck was already a Pentax LX user and member of the Pentax Club UK.

As far as I know, today in Italy there are only three LX Gold cameras, two of them being owned by AOHC members and the third one gifted by Api to a sales representative on occasion of his retirement after many years of service with them. The LX Gold XM028 was also shown at 5th Pentax Day. An American friend of mine owns another one (XM011). Apparently, the LX Gold for the US market had a different type of leather, maybe for import laws about leather of endangered species. 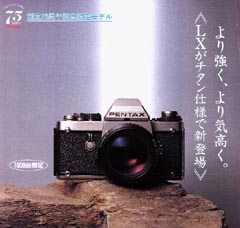 In September 1994 another limited edition was put into production to celebrate 75th anniversary of Asahi Opt. Co. It was called the LX Titan, it had natural titanium top housing and base plate and it was manufactured in 1,000pcs. No special engraving was necessary to name it, as the titanium shell was easily identified. Special 75th Anniversary brown leather strap, special brown box and accessories made this limited edition LX even more recognizable from the standard type. The LX Titan was only on sale in Japan for 280,000 Yen. Serial numbers start from 7500001, up to 7501000. As far as I know, there is currently only one LX Titan in Italy (S/No. 7500213), bought in Japan, and it was on display at 5th Pentax Day.

In early 1996 another special edition LX was introduced: 300pcs of "LX Limited" were offered with black finished titanium plates. This time the word TITANIUM was engraved on front plate, otherwise the black finish could hide the use of titanium in body housings. Again, special leather strap and commemorative black box were included in the package. The LX Limited was intended to celebrate 15 years of LX production and was only sold in Japan for 300,000 Yen. Serial numbers are in the 4013000 range (registered numbers are 4013427 and 4013554). It’s quite a strange number range, not starting from a number ending with 000, unless the limited production batch of 300pcs was surpassed.

At time of introduction of the LX Limited, it was announced as the last production batch of the LX, but that wasn’t true. Since then, the standard LX has still been on sale in Japan at around 150,000 Yen, half the price of the limited versions. The LX is still manufactured in limited batches according to market demand.

Now we are celebrating 20 years of the LX, and strong rumors about another possible special edition LX to be introduced this summer have been officially confirmed. The LX 2000 was announced in Japan on June 13th.

The LX 2000 is a chrome finished version of the standard LX, featuring FA-1W viewfinder, natural bright matte focusing screen (like that of Z1p), shutter release attachment, grip B, and commemorative leather strap. The lens is also a special version of the SMC Pentax-A f/1.2 50mm, in silver finish and with metal focusing ring, hood and front cap. Price in Japan will be 330,000 Yen. Production run was not announced at time of introduction, but Pentax only said that they will accept reservations starting from August and sales will take place from October to December. Now they say that the production batch will be 1,000 pcs.

(*) With the ME Super, introduced in late 1979, the simple PENTAX designation replaced the former ASAHI PENTAX.

The original article was published on SPOTMATIC magazine #25, July 2000.