A rare variation of the first camera made by Pentax for Honeywell in 1959. 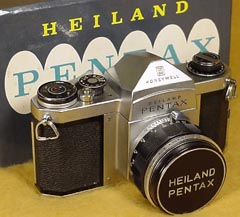 The "Store Demonstrator" H2 models observed by the writer fall in the serial number group from 210,000 to about 222,000. However, based on the infrequency of finding these cameras, I seriously doubt that much of the group of serial numbers in between was lettered as "Store Demonstrator" models. Probably several successive orders were produced at various times.
Based on a number of years of observation of camera shows and the eBay internet auction, the "Store Demonstrator" H2 cameras turn up about 1/3 as often as the Pentax "S" camera (3000+ produced), so a realistic estimate would probably be that around 1000 of these cameras may have been issued. The black version of the camera is extremely uncommon. 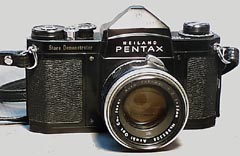 In a dozen years of visiting camera shows in Canada and a few other countries, I have not encountered any "Store Demonstrator" versions of the Asahi Pentax H2 or the Asahi Pentax S2, so my best guess is that these cameras were the result of a direct agreement between Heiland and Asahi Optical. Considering the proliferation of H2 models which were produced, which included Heiland Pentax H2, Asahi Pentax H2, Asahiflex H2, and Penta Asahiflex H2 models, these "Store Demonstrator" cameras provide yet another interesting variation for the Pentax collector.

The original article was published on SPOTMATIC magazine #24, April 2000.