A complete set of this camera of the pre-Pentax era was bought in Okinawa in 1955. Camera and accessories are discussed here.

On a particular occasion in the beginning of 1998, I found a letter in my E-mail inbox that originated from a nice gentleman in the USA who visited my Original Asahi Pentax Spotmatic Home Page on internet. He asked if I was interested in acquiring a complete Asahiflex IIB camera set, which was owned by his father, for my collection? I didn’t have to think long about that. Of course I was! Sadly, we soon lost contact. That was because the seller’s father was very ill and he could not sell the equipment without his father’s consent. I felt very bad about this, and hoped that his father would get better very soon. I forgot all about the camera set until the beginning of this year, when I received another message from the same gentleman. He said that his father was better again and that he gave him his permission to sell the items to me. I was very happy with the father’s recovery as well as my good fortune.

Up to that time, I had only a very rough idea about the contents of the set. Then, many E-mails with even more questions flew back and forth across the ocean. At one certain point, I had enough information and felt that I should not miss this opportunity. As a result, a price was agreed upon, and in February of this year, several weeks after my payment was sent, a large and heavy package arrived at the post office. 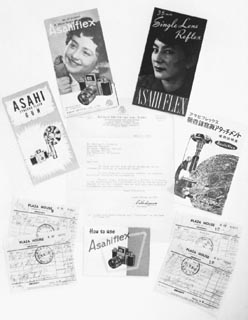 The set described in detail

It is not rare to find single Asahiflex cameras or Asahiflex accessories for your collection. They do show up every once in a while. But finding a photographer’s Asahiflex set that was kept complete for more than nearly 45 years is something that probably happens only once in a collector’s lifetime. Thus, to keep the information available for future researchers, I have tried to describe every item in detail. But first, I’ll tell you where and how the set was bought.

The pamphlets and the letter

Prior to ordering the camera and the rest of the items in 1955, the buyer requested information from the Asahi Optical Co., Ltd. factory in Tokyo, which was then located at the address no. 980 Maenocho, Shimura, Itabashi-Ku in Tokyo, Japan. After some time, he received several pamphlets with an accompanying letter on rice paper (the watermark on the paper says "Three Diamonds"). The letter is dated June 10, 1955 and was signed by Mr. S. Ishikawa, Sales Manager. Also note the paragraph where Mr. Ishikawa mentions the "Tower 23" camera which was distributed by Sears, Roebuck & Co in Chicago, USA. Strangely enough, the letterhead says that the company was established in 1910. But all publications I have (both from Asahi Optical Co. and independent publishers) state that the company only began producing in 1919. Uncertain of the real establishing date, I contacted Asahi Optical Co., Ltd. directly. The Public Relations Manager told me that the company was indeed established in 1919 and that the letterhead was certainly a misprint. I am sorry for any of you who might have hoped that the company is almost 90 years old. But imagine the name of the Pentax LX, which otherwise should have been called "LXX" if the company was really 9 years older.

The purchasing of the items

Some two months after the pamphlets were received, the camera was bought on July 5, 1955 at Plaza House in Okinawa, Japan. Okinawa is an island located south of mainland Japan in the East China Sea and is mostly known of the famous American invasion in April 1945. The shop where the camera was bought probably was a leftover from the time American Forces occupied Japan. The original four receipts from the same shop are issued on four separate dates. The recorded prices for the items were as reported in table.

As you can see, the original buyer was given a standard discount of no less than 20% on all items, presumably because the camera shop owner was his friend (by word of mouth from the former camera owner).

The Asahiflex IIB camera, with serial number 50708, is an interesting early model because it still has many of the features of the Asahiflex IA. The shutter speed selector and frame counter marks are no triangles as you might expect, but arrows like those found on the I and IA. The ground glass also features the etched reticule (crosshairs). The AOCo logo on the viewfinder hood is the bigger, earlier version (12mm high and 10mm wide). The shutter speed dial is of Sherfy type 3. It is equipped with an otherwise normal 58mm f/2.4 Asahi-Kogaku Takumar, serial number 59618, with its original metal AOCo engraved front cap. The viewfinder window mask has the correct dimensions for use with the 58mm standard lens.

This is one of the rarer Asahiflex accessories. Since an Asahiflex owner was not committed to buy original Asahi equipment, it is quite understandable that many of them chose to buy a cheaper third-party flashgun, making it very hard to find the original Asahi Synchro-Flash Gun. The Flash Gun itself is of a very high build quality and is made of heavy chromed brass. It’s almost as heavy as the Asahiflex camera itself. It is better made than most flashes that were available at the time (which were mostly made of aluminium and plastic). The flash consists of three distinct parts: the bracket, the flash handle and the screw-on reflector. The bracket is finished in an unusual way: the bottom is in dull chrome, while the outside rim is in shiny chrome. The flash handle is engraved with the well-known AOCo logo and the Asahiflex name and has connections for the synchronization cable and an external flash. There is also a chrome lamp test button above the AOCo logo. The top of the handle, where the flashbulb fitting is, appears to be made of black bakelite. The flash accepts blue press-type flashbulbs. A funny side note: it is very fortunate that the Asahiflex flash is so rare, because currently there is a big demand for Graflex three-cell flashguns that look very similar. These Graflex flashes are then converted to Star Wars light sabers, ruining them for the Graflex collector market. Thanks to the new Star Wars film, prices of that ordinary flashgun have increased to no less than US$300 in the last few months. So, please never mention Star Wars when referring to the Asahiflex flashgun!

The accessories are items that an avid photographer of the 50’s could not live without. It is interesting that the former owner needed no less than nine different filters. The two colored Walz filter sets are of a very high quality and, when put next to each other, almost look like a box full of watercolor paint: the color of the six filters varies from light orange to dark orange and from light blue to dark blue. The polarizing filter is also of the Walz brand. It is interesting to note that the filter sets, including the two remaining filters (the UV and the Skylight filter) have famous lens names on them: the Nikkor 5cm f/1.4 and the Carl Zeiss Sonnar. Maybe this was to increase sales to Nikon and Contax owners. To fit the filters on the camera, an ubiquitous Kodak series VI to VII adapter ring was used, as well as a Walz series VII adapter (engraved "For Nikkor") and Walz lens hood.

The original Asahi Optical Co. extension tube set consists of four separate extension tubes of a very high build quality. Like the flash and the Asahiflex lenses, the tubes are made of very heavily chromed brass. They are marked from I to IIII (the last one is not marked IV, as opposed to some publications) and are also engraved with the distance range in which the subject is in focus with the 50mm f/3.5 lens.

Also included in the set is a test lamp for the flash, which came in its original box.

It is always thrilling to add a few new Asahiflex items to my collection. As I said before, they are not rare, but I still find it amazing that these items have withstood the time so well. This is a real tribute to the designers of the Asahiflex camera. And, as you can see, it is still possible to find variations and previously unknown items which help a collector to narrow down serial number ranges and which give a better idea about the history of the early Asahi items.

In an upcoming article, I will describe the letter, the pamphlets and the manual that came with the camera set in detail. After that, I will tell you a nice story about the birth of the Asahiflex, its designers and the company behind it. Most of the information I acquired during my research (with invaluable help from others) has never been published in a language other than Japanese before. I will also tell you about the prototype Asahiflex camera with pentaprism finder which was said to exist, but never seen. That is, until the picture is published in Spotmatic Magazine!
Thanks to my friend Ali Diblan for proofreading this article and his moral support whenever I am caught in a severe "Asahi" buying frenzy. Also a warm thanks to Fred Sherfy for his listening ears and invaluable ideas. Last, but not least, I want to thank Preston Cook for providing me with additional data.

The original article was published on SPOTMATIC magazine #21, July 1999.